Called Time Loop, we developed a way of conversing in which we look at current dilemmas from various perspectives in time.

In the world we grew up in it seems like short-term thinking is more important than looking ahead or reflecting on the past. Can we extend our sense of time, enlarge the time-space in which we live and think? For instance, what did people think about keeping borders open or shut two hundred years ago, and what will they think in 2216?

Time Loop is inspired by the theory and practice of an indigenous community living at the Great Lake District in Canada. We met each other in the summer of 2015 at a festival where they were present with their company Debajehmujig to share their stories and history, to prevent them from disappearing. They told us that before making important decisions, they first consult their ancestors from seven generations ago, and then they consult their descendants from seven generations ahead. Only after that do they investigate the impact that a possible decision will have on the present. We noticed that for us short-term thinking often seems more important than looking ahead or reflecting on the past. As a result, the future is distant and abstract, unrelated to the world in which we live. Can relating to the remote past help us to also relate to the distant future? 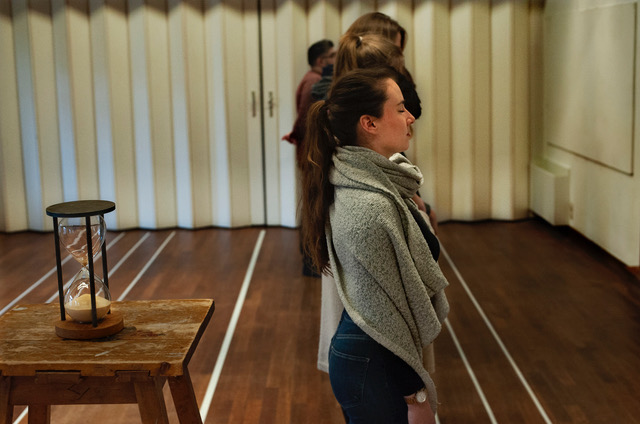 “Time Loop makes the issues of the day disappear into the background for a while.”